About Gold Star Family of Companies

Founded in 2000 by Daniel Milstein, Gold Star Mortgage Financial Group, a division of the Gold Star Family of Companies, is one of the nation's premier mortgage companies, doing business in 33 states, with 46 Branch Lending Centers nationwide. 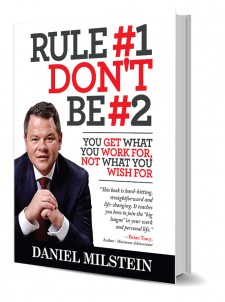 In his fourth book Rule # 1 Don't Be #2, best-selling author Daniel Milstein motivates like never before, sharing the deeply inspirational stories of his clients who've overcome insurmountable odds on the way to the top of their game in the ruthlessly competitive sport of hockey.

Ann Arbor, MI, June 22, 2017 (Newswire.com) - Success is never owned. It’s rented, and the rent is due every day. This is Sports Agent and best-selling author Daniel Milstein’s personal credo, and what has fueled his do-or-die ability to overcome extreme adversity and reach the pinnacle of success in multiple fields. In his fourth book Rule # 1 Don’t Be #2, Milstein motivates like never before, sharing the deeply inspirational stories of his clients who’ve overcome insurmountable odds on the way to the top of their game in the ruthlessly competitive sport of hockey.

Milstein’s Family of Companies includes Gold Star Hockey, whose client roster reflects many household names, including Pavel Datsyuk, formerly of the Detroit Red Wings- now with SKA, Artemi Panarin with the Chicago Blackhawks, Nikita Kucherov with Tampa Bay Lightning, Nikita Zaitsev with the Toronto Maple Leafs, among others – all of whom know firsthand that you get what you work for, not what you wish for, another of Milstein’s many principles that resonate throughout the book.

With a mentor’s heart and unyielding belief that choice, not circumstance, determines your success, Milstein packs the countless, powerful achievements of those who’ve personally inspired him into every page of Rule #1, Don’t Be #2 and unapologetically demands that his readers identify and overcome their own obstacles to success.

“Gold Star Hockey client Pavel Datsyuk can attest to the importance of remaining committed to your goal in the face of crushing disappointment,” explains Milstein. “Datsyuk dreamed of playing professional hockey, yet was passed over 657 times in the National Hockey League drafts. Refusing to give up his dream, Datsyuk continued to work hard until he was picked up by the Detroit Red Wings and went on to help them win two Stanley Cup Championships, and he’ll no doubt take his place of honor one day in the Hockey Hall of Fame.”

In Rule #1 Don’t Be #2 Milstein maintains that success or failure is only determined by where you stop and provides the tools necessary to push through, and learn from, failure and setbacks. Milstein seeks not only to inspire but to empower others to develop the grit and determination required to be #1. Anyone willing to roll up their sleeves and apply Milstein’s no non-nonsense, yet seemingly magical, strategy for success will find this book nothing short of life-changing. For anyone who’s lost hope, momentum or direction, pick up this book today, and prepare to be inspired.

Daniel Milstein is the Founder and CEO of the Gold Star Family of Companies, operating in over 40 offices worldwide, specializing in Sports Management, Financial Services, Publishing and Film Production. Under Dan’s visionary leadership, Gold Star has been named among Inc. magazine’s 500 Fastest Growing Companies in America.

Dan was born in the Soviet Union and just 16 when he narrowly escaped the turbulent aftermath of the Chernobyl Disaster, immigrating to the United States in 1991 in search of a better life. Arriving with only 17 cents in his pocket, but fueled by his determination to seize the American Dream, Dan first hurdled the challenges of immigration, then stormed every opportunity in his path, quickly rising to the rank of #1 Loan Officer in the country out of 550,000 lending industry professionals. He has routinely landed on America’s most notable lists of the youngest and most impressive entrepreneurs. He’s been included in the prestigious “40 Under 40” in Crain’s magazine, “30 in their Thirties” by dBusiness magazine and numerous rosters of Top Finance Professionals.

Demonstrating a decades-long ability to maximize opportunity for himself and others, Dan’s passion for mentoring led to the expansion and diversification of Gold Star and launched his writing career in 2010. Now the award-winning, international best-selling author of The ABC of Sales, 17 Cents and a Dream and Street Smart Selling, Dan adds the greatly anticipated Rule #1: Don’t Be #2 to his body of work. Consultant, speaker and member of the esteemed National Academy of Best-Selling Authors, Milstein is credited with motivating hundreds of thousands with his simple, yet powerful, brand of inspiration.

Source: Gold Star Hockey, a division of the Gold Star Family of Companies

Get notified about new releases.

Sign up for email updates from Gold Star Family of Companies.